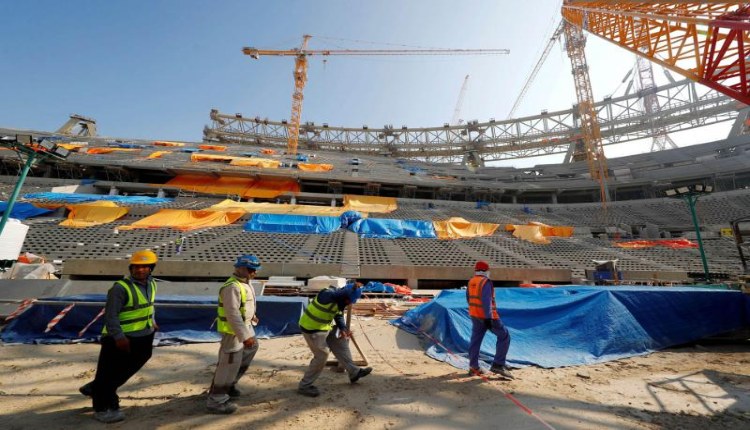 After the protests of the Norwegian and German teams for boycotting the Qatar World Cup 2022. Netherland has highlighted the cause for improving the Human Rights in Qatar for the Migrant Workers. Recent news show that almost 6,500 migrant workers have lost their lives in the construction of the Qatar Stadium for the World Cup for 2022.

Qatar was awarded the right to hold the 2022 FIFA World Cup back in 2010 where-as the construction of the Stadium began in 2014, since then reportedly 6,500 workers have lost their lives due to poor arrangements for migrant workers. Netherland’s head coach Frank De Boer told the news during a press conference on the eve of team’s opening Group Match against Turkey in Istanbul, Frank said “A lot of attention is now focused on whether we should go there if we qualify.” He also referred to the Dutch Football association’s ruling on boycotting the World cup due to the situation of the migrant workers, He said “It is right to ask that question … Everyone knows that what is happening there is not good.”

Government officials of Qatar stated that “The mortality rate among these communities is within the expected range for the size and demographics of the Population. Though every life lost is a tragedy.” Before the Netherlands ’ coach highlighting the issue, Belgium Manager Roberto Martinez spoke to the news as he said “I think it is the time to face that situation and I think boycotting the World Cup wouldn’t be the solution, It would be a big mistake.” As teams have already trained and built up their enthusiasm magnificently, Boycotting the World Cup would not only highly delay the match but all the training and spirit of the players would be lost.

After being pressurized by Human Rights groups for years and years, The Qatari government has to take a huge step in letting go of the “Kafala” system in the country, Kafala system is basically a Sponsorship system where the Employee must take permission from his Employer, Who sponsored the worker’s visa, to change their jobs or to leave the country be it a final exit or just a vacation. The Kafala system also spoiled some of the Qatari nationals on solely living on the monthly fees they’d obtain from their employees. If the employee ever failed to pay their Kafeel (Sponsor). He would simply cancel the visa online or mark the visa as a Huroob ( Run-Away Employee ), After which the employee had to face jail-time or had to pay a hefty amount of fine to the government and the sponsor in order to get his papers cleared.

The Qatari government also increased the minimum monthly income to 1,000 RIYALS or $275 dollars for all the workers, Including the Qatar nationals.

A Spokesman for Qatar’s Supreme Committee for Delivery and Legacy told reporters that they are transparent about the health and safety of workers on projects directly related to the Qatar World Cup 2022. The construction of the stadium began in 2014, Where the number of work-related deaths recorded were only 3, Whereas the rest of the 36 mortalities were not work-related.

The Qatari Government also said that the health and safety reforms had helped to steadily reduce worker mortality over the last decade.

The Netherlands ’ team captain, Georginio Wijnaldum told the news that the players have discussed the issue, also said that “It’s a big topic, but we all believe we should go there if we qualify. Then we can have a greater impact on change.”

Get ready to go on a journey to the beach with Lil Yachty on Let's Begin Here, … END_OF_DOCUMENT_TOKEN_TO_BE_REPLACED