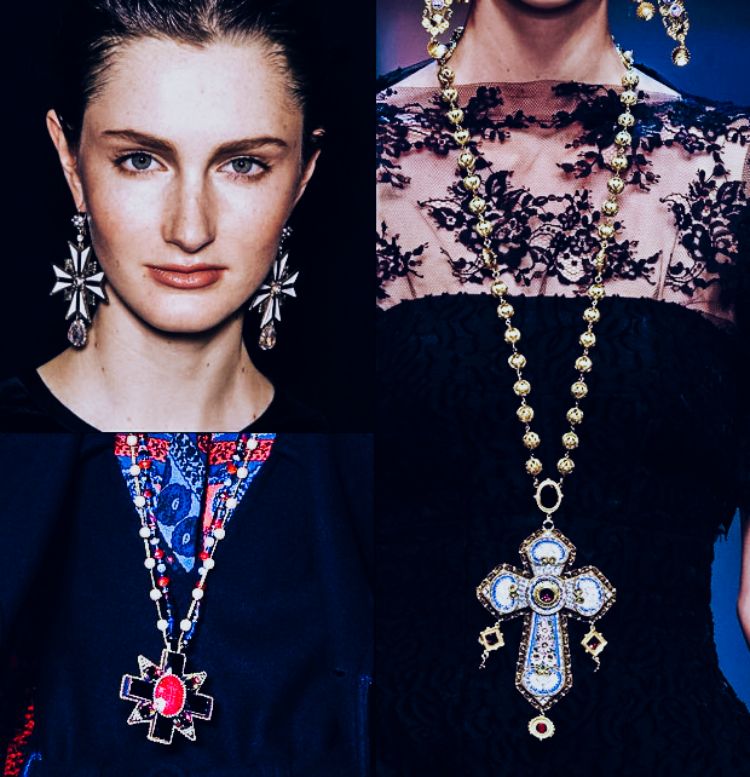 The cross has ceased to be a symbol of religion. Modern fashionistas wear cross jewelry to show off. Indeed, a symbol that is sacred to millions of people around the world turned into a fashionable trinket cannot help but stir attention. This attention is often negative, but does it matter if it makes people talk about you?

The main ideological inspirers for wearing crosses as costume jewelry are the Goths. Before this subculture was born in the late 1970s, people used body crosses or crucifixes exclusively as faith indicators. In truth, the cross is thousands of years older than Christianity. The ancients believed that two bars put perpendicular to each other had mystical properties. The four ends of the cross stood for cordial points, and their intersection represented the center of the universe.

That being said, the spread of Christianity throughout the world made us forget about the ancient meanings given to the cross. Only the establishment of the Goth subculture, and the subsequent boom in Gothic aesthetics, made us look at the crosses from a different perspective.

Now, Gothic and Christianity seem to be on the opposing ends of the spectrum. Indeed, due to the abundance of symbols referring to paganism and even Satanism, Gothic is viewed as a movement opposing itself to religion. However, if you bother to take a minute and learn about Gothic’s origins, you will see that it was spawned by Christianity.

Gothic originated in the Middle Ages as an architectural style. Cologne Cathedral, Reims Cathedral, Milan Cathedral, and of course Notre Dame de Paris are all representatives of the Gothic style. As you might guess, Gothic focused on religious structures that emphasized the greatness of the divine. As soon as Gothic conquered the architectural domain, it threw itself into fashion and jewelry thus giving them the most prominent features of cathedrals and temples: slender elongated shapes resembling spires, an abundance of decorative curls, floral motifs, precious stone inlays reminiscent of stained glass windows, etc. Overall, Gothic jewelry is quite heavyweight and highly ornate.

But let’s back to the crosses. Just as you cannot imagine a Catholic temple without a cross, Gothic jewelry is unthinkable without religious motifs. It had no choice but to introduce two intersecting bars into pendants and accessories. Although the Bible teaches righteous Christians to be humble, Gothic cross jewelry is everything but humility. It is enormous, precious, and intricate. It perfectly fits into the image of the servants of God known for their addiction to luxury. But noble ladies and gentlemen did not lag behind. Their crosses were genuine works of art. Commoners, on the other hand, did not wear huge crosses – the Medieval Church introduced, as it were, a ban on jewelry. Only people of power and wealth had the right to violate prohibitions. Nevertheless, the cross remained, before all, a symbol of faith, not a means of decoration.

The modern Gothic style could not ignore the traditions developed many centuries ago. However, it rethought some of the meanings that were laid in symbolism. For modern Goths, the cross is not necessarily an indicator of faith. Most likely, this is an allusion to suffering, anguish, and death. Yes, modern Gothic built its ideology around the theme of suffering, added a pinch of mysticism, borrowed some symbols from other cultures, and voila, its doctrine is ready.

By the way, if you think that Gothic since it uses demonic symbols in its philosophy, worships Satan, you are deeply mistaken. Although there are Satanist Goths, the subculture itself does not worship any particular deity or demon. And if you wonder why they wear images of gruesome mythical creatures, then we suggest taking a closer look at Christian architecture. If cathedrals have the right to carry gargoyles, why should we deny the Goths this right?

But we digressed, let’s get back to Gothic crosses again. Goths flaunt Christian crosses with great relish but their sizes and shapes are deliberately exaggerated. Instead of the regular smooth crosses, they prefer items embellished with carvings, embossing, and encrusting. Quite frequently, the main Christian symbol co-exists with pentagrams or pagan motifs. This adjacency may be shocking but there is nothing out of the norm about it – Christianity itself loved to endow pagan themes with new meanings. Take the Celtic cross, for example, the circle in its center directly indicates the meaning of the sun, the main deity in the pagan world. However, Christianity found a way to use the Celtic cross to preach its religion, turning it into a symbol of Irish Catholicism. Needless to say, the Goths respect the Celtic cross as well; however, according to their doctrine, they try to emphasize its pagan roots.

In general, there is a huge variety of crosses in the world, and Gothic seems to use all of them. That being said, the cross that has become synonymous with Gothic is the Ankh, otherwise known as the Coptic cross. Interestingly, this cross became Gothic by a fluke. One of the characters in the cult vampire movie The Hunger wore an Ankh pendant. Its look tickled Goth’s fancy, and hence it became their most mainstream symbol.

Along with it, the Goths wear the so-called cross of the inquisitor, the cross of the heretic (an instrument of torture created by none other than inquisition), and an inverted cross. All these symbols come from Christianity (even the inverted cross, which is alternatively called the Cross of St. Peter) and are closely associated with physical and spiritual suffering. And as you already know, this is the core of Gothic philosophy.

Get ready to go on a journey to the beach with Lil Yachty on Let's Begin Here, … END_OF_DOCUMENT_TOKEN_TO_BE_REPLACED